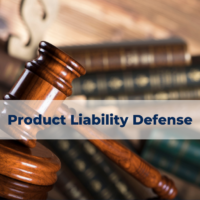 In product liability lawsuits, when can specific jurisdiction allow a plaintiff to file a product liability claim in that plaintiff’s home state even when the company does not have any clear contacts within that state? This is a question that is critical for companies producing products to understand since the answer can affect how and where a company must defend against defective product claims. The U.S. Supreme Court recently considered this question in Ford Motor Co. v. Montana Eighth Judicial District Court (Decided 3-25-2021), and the court ruled unanimously in an 8-0 decision. In the case, the court considered whether the connection between the plaintiff’s claims and the company’s activities in the forum States was close enough to support specific jurisdiction, and the court determined that those connections were close enough.

This case is likely to have significant implications for companies that must defend against product liability lawsuits in New Jersey and Pennsylvania.

Getting the Facts of the Case in Ford

In Ford Motor Co. v. Montana Eighth Judicial District Court, two plaintiffs filed a product liability lawsuit against Ford Motor Company for injuries arising out of a car accident. The plaintiffs filed their lawsuits in the state where the accident happened, which was also the state in which the plaintiff was a resident. In each case, Ford Motor Company, according to the U.S. Supreme Court, “did substantial business in the state,” such as “advertising, selling, and servicing the model of vehicle the suit claims is defective.” However, Ford argued that that jurisdiction was improper “because the particular car involved in the crash was not first sold in the forum State, nor was it designed or manufactured there.”

Background for Considering Jurisdiction in Ford

To be clear, the U.S. Supreme Court determined that “the place of a plaintiff’s injury and residence” can be relevant in determining whether a state court has jurisdiction to hear a product liability lawsuit even when the company is not headquartered in that state and did not design or manufacture the product in that state. Ultimately, the court held that the plaintiffs in the case could file a lawsuit against Ford Motor Company due to the company’s ties to the state, and the fact that the plaintiff resided in the state and that the accident occurred in the state. We want to provide more information about how the court reached its conclusion.

In Ford, the U.S. Supreme Court explained that Ford sought to dismiss the lawsuits against it in the state at issue for lack of personal jurisdiction. Ford argued that a state court can only have jurisdiction if a company’s conduct in that particular state gives rise to the plaintiff’s lawsuit. Ford further argued that this necessary link would only exist if it had designed or manufactured the vehicle in the state, or if it sold the vehicle in the state. The plaintiffs in this case could not show any of these links between Ford and the state where they had filed a claim, and thus, Ford argued, the state in each situation did not have jurisdiction.

The lower courts disagreed, pointing to the ways in which Ford “purposefully” sought to “serve the market” in these states, including advertising and providing repair and replacement services there. Further, the lower courts said, Ford’s conduct encouraged residents in the states where the lawsuits had been filed to drive Ford vehicles. Thus, when an injury occurs in such a state, the state should have jurisdiction to hear a product liability case. The U.S. Supreme Court agreed to hear Ford and determined that a state court in this type of scenario does have jurisdiction.

The U.S. Supreme Court explained that a “state court may exercise general jurisdiction only when a defendant is ‘essentially at home’ in the State,” and that general jurisdiction “extends to ‘any and all claims’ brought against a defendant. The court explained that “specific jurisdiction is different” in that it “covers defendants less intimately connected with a State, but only as to a narrower class of claims.” The Court emphasized that, for specific jurisdiction, the contacts between the defendant and a state must involve “purposeful availment.” Referring to a previous case, the Court clarified that purposeful availment entails “some act by which [a defendant] avails itself of the privilege of conducting activities within the forum State.” The defendant must make a choice to avail itself of a state for there to be specific jurisdiction, and the defendant’s conducts cannot be “random, isolated, or fortuitous.”

In the present case, Ford admitted that it had purposefully availed itself in the states but argued its contacts with the states were insufficient. Indeed, Ford argued that jurisdiction would only attach if its conduct in those states—e.g., advertising, setting up dealerships, making repairs—gave rise to or caused the alleged harm. The Court disagreed, and held that “the connection between the plaintiffs’ claims and Ford’s activities in those States . . . is close enough to support specific jurisdiction.”

The Ford decision should put companies on notice that they may need to defend against product liability claims in New Jersey or Pennsylvania courts when plaintiffs file claims there even if their contacts with the state do not give rise to the claim. In other words, having sufficient contact in those states, even if the contacts do not give rise to the alleged harm, may be enough for one of those state courts to have jurisdiction if the plaintiff resides in the state and alleges harm by the product in the state.